Breathing. We all do it.

Yet we never talk about how to breathe. Wim Hof—The Iceman—is changing that.

And he’s showing people how it is possible to improve your immune system, increase your energy levels, improve your physical and mental health, and even control your body’s temperature just through your breathing.

Who is Wim Hof?

I first learned about Wim Hof from a friend of mine.

After hearing my buddy talk about this guy and the breathing training he teaches for several months straight, I finally decided I had to check him out for myself.

Wim Hof is a 61-year-old adventurer and professional daredevil from the Netherlands. He goes by “The Iceman” because of his ability to withstand extreme cold. This is related to the breathing, but we’ll cover that more in a bit.

One of Wim’s world records is for taking the longest ice bath in the world: 1 hour, 52 minutes, and 42 seconds—a record that he’s broken several times since. 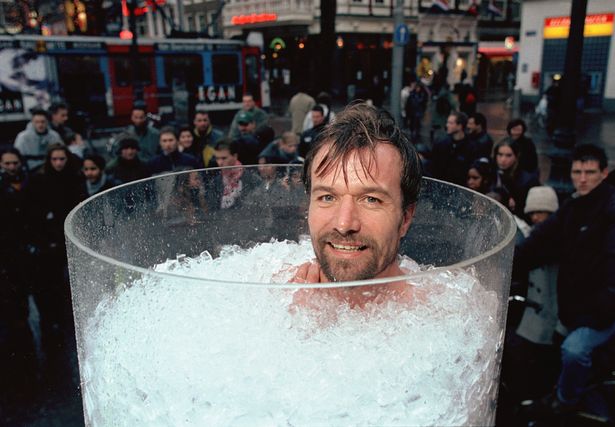 A feat taught and displayed in hospitals and written about in medical journals. 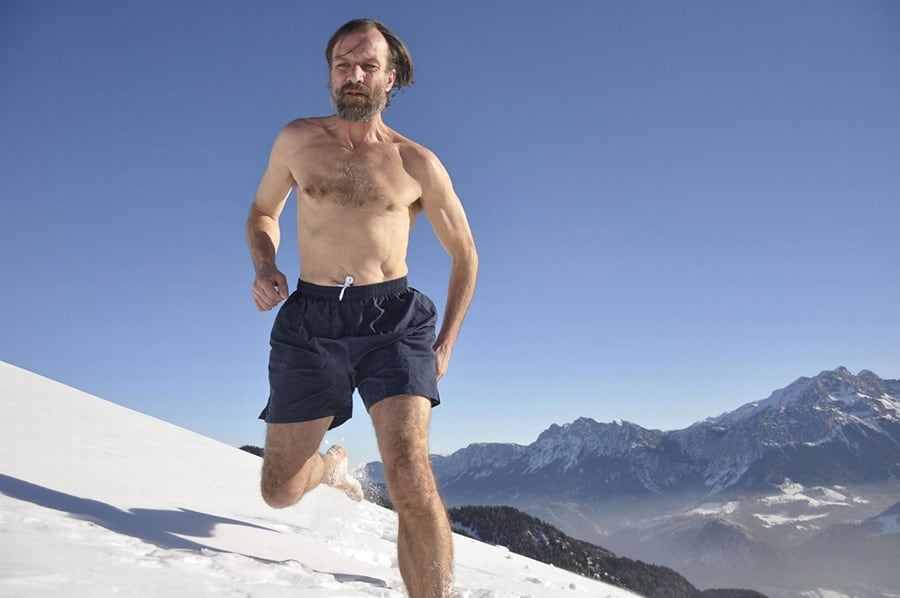 See why he’s The Iceman yet?

Wim Hof, probably more than anybody else, has challenged the limits of what the human body is capable of. But he wasn’t always The Iceman.

In the Vice documentary about Wim Hof’s life, he shares the story of how his wife committed suicide, leaving him to raise their four children all on his own.

The suicide sent Wim into a deep depression.

He felt life had lost its meaning, and to battle the numbness of it all he started to swim in ice-cold rivers around where he lived, just to feel more alive. The cold was “merciless but righteous,” Wim says in the doc.

This marked the beginning of a lifelong journey of self-experimentation for Wim Hof, who ended up devoting his life to exploring the power of the cold and breathing to improve our mental and physical health and sharing his knowledge with the world.

Superhuman abilities, a deeply tragic origin story, and an important mission. Is this guy a Marvel superhero?

The science behind the method

Over the years, Wim Hof has developed his own breathing method, aptly titled the Wim Hof Method. He teaches his method through in-person workshops and online video courses. His “Fundamentals” video course is $279, but currently discounted by 35% because of Covid-19 (enter COVID35 at checkout to claim the discount).

There are two basic aspects of Wim Hof’s teachings, and they work in tandem with each other:

Consistent practice of Wim’s methods has many benefits. According to his own website, they include:

If true, the benefits more than make up for the price tag of the course ($279). The first time I took the course was about four years ago now, and the benefits I’ve experienced for my mental and physical performance have been powerful. I’m a believer.

But before I go into my own personal experiences with the Wim Hof Method, let’s take a look at the science of the claims.

Because of Wim’s crazy self-experimentations, he’s attracted the attention of researchers around the world. Peer-reviewed research on the Wim Hof Method has been published in several authoritative scientific journals. Here are a few of the more interesting studies:

The power of proper breathing was even known by the ancients.

Chinese scholars in 400 B.C. wrote books on breathing. “Therefore, the scholar who nourishes his life refines the form and nourishes his breath,” according to a Tao text. “Isn’t this evident?” Modern science confirms ancient wisdom. In the ‘80s, scientists analyzed two decades of data from 5,200 subjects. What they found was that the most important indicator of life expectancy wasn’t genetics, diet, or even exercise. It was lung capacity. The larger your lungs, the more effective your breathing, and the longer your live.

Why? Because big lungs enable us to take in more air with fewer breaths. Breathing properly is literally the key to a longer life.

So. That’s the significance and science of breathing. Let’s move on to the Wim Hof Method. I’ve been practicing it for about four years at this point, and the benefits have been magical.

1. Sit down in a comfortable meditation posture.

The first step of the Wim Hof Method is simple. Sit down in a meditation posture, whichever one is most comfortable for you. Then, make sure you can expand your lungs freely without feeling any constriction. Wim recommends that you do this practice after waking up since your stomach is still empty. You can also do it right before a meal though.

Inhale through the nose or mouth and exhale through the mouth in short but powerful bursts. Keep a steady pace and use your midriff fully. You should close your eyes and do these power breaths 30 times. You might experience tingling sensations in the body or light-headedness. That’s normal when you’re a beginner with these breathing exercises.

3. Breathe in deep, breathe out and hold (the most important part of the breathing exercises)

Now, inhale to full capacity. You’ll feel your chest expanding. Once you are at “full capacity”, hold your breath for around 10 seconds. That’s round one. Repeat about 3 times.

5. Take some time to recover.

You’re done. Take some time to recover. Personally, I do 5-10 minutes of recovery. Don’t over-exert yourself, especially in the beginning.

Do this exercise daily. After a while, you can add another “round” or two to the exercise. So, repeating once more:

Now, please keep in mind I am not a doctor or health professional. I’m just a guy who got a lot of this breathing practice. It’s probably best if you consult a pro before you do these exercises, especially if you have had problems with your health in the past.

Starting out with the breathing exercises, I did feel a little light-headedness (which I hear is a pretty common thing). For this reason, you should not do any of these exercises underwater, while driving, standing up, etc. Common sense isn’t common these days, but if you have it, apply it here. And if you do experience light-headedness, take a break from the exercises.

With all those disclaimers out of the way, I will say this:

After doing these exercises semi-regularly for four years, I have never felt better.

Not only is my breathing the best it’s ever, I have more energy to get through my workouts and I see cold as my friend for healing.

So, on that fateful day in late 2016, I pulled the trigger and made a commitment to learn the fundamentals of the method. It’s some of the best money I’ve ever spent. 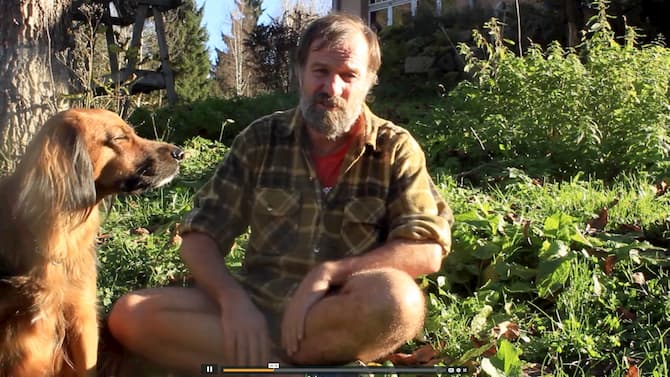 In addition to the breathing techniques from the Wim Hof Method, you will learn exercises that you can practice when you’re short on time. You will also learn yoga and be encouraged to become friends with cold temperatures. It’s really the complete package.

No course by the Iceman himself would be complete if it didn’t show you how to tame the cold. By learning to take cold showers, you build up to eventually doing Wim’s famous ice baths. They’re incredibly beneficial, especially if you exercise regularly. Cold is an antidote to inflammation.

In the course, you are encouraged to take cold showers in order to build up to eventually doing Wim’s famous ice baths. The cold showers and ice baths are trained in tandem with the breathe work.

The benefits are powerful. In addition to reducing inflammation and muscle damage, they also help improve your central nervous system and train your vagus nerve, which enables you to better handle stressful situations.

Going into the course, I actually wasn’t a stranger to ice baths. When I did professional boxing I regularly took ice baths to keep the swelling down after fights. But I viewed them as a necessary torture. The Wim Hof Method has taught me how to find comfort and control in the cold. 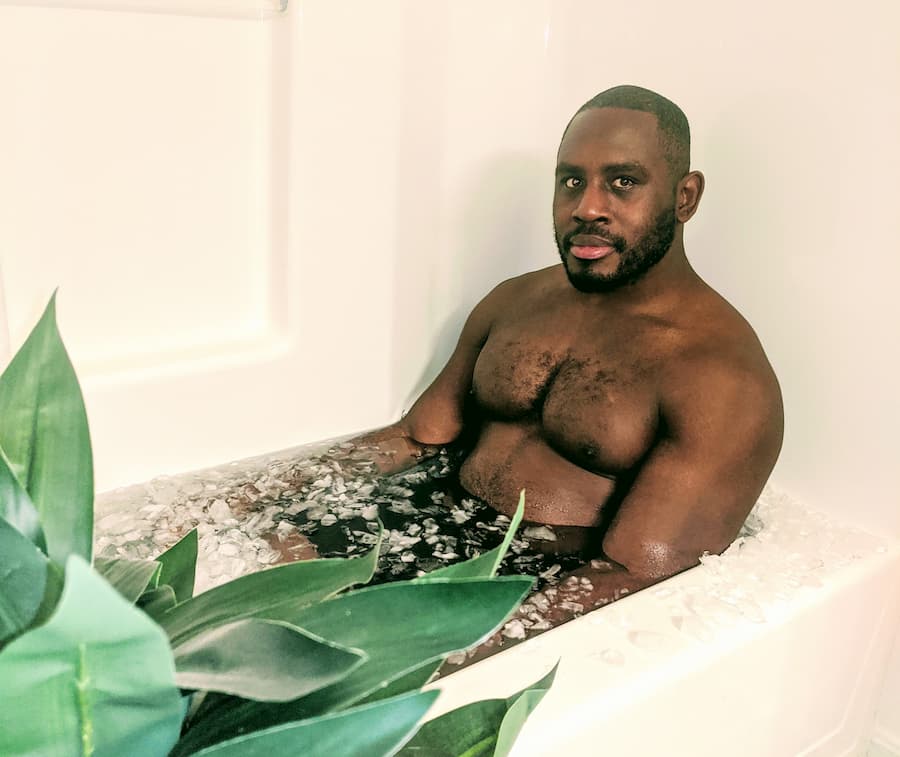 Prior to studying the breathing and nervous system techniques, ice baths were not something I looked forward to. But now that I have the breathing and concentration tools in my arsenal to control my mental and physical responses to the extreme cold, I can legitimately relax in the cold.

Overall, the biggest benefit of the Wim Hof Method for me, has been that it’s given me control over bodily processes that I once considered uncontrollable. When you control your shivering or keep your breathing regulated while cold water runs down your back, you feel real power. The closest thing I’ve ever experienced to this type of power was when I first learned how to fight.

Boxing trains you to stare down attacks without flinching. Flinching is an automatic response in most people, but you won’t survive very long in boxing if you don’t learn how to control it. You’ll either fall for every fake or you’ll close your eyes when someone is about to hit you.

In fighting, we call this “turning down the noise”. It takes a little practice but once you master it, the world no longer feels threatening. When others panic and behave reactively, you’re able to respond calmly and intentionally. It’s a superpower.

And when you master the breathwork that is taught in the Wim Hof’s course, you realize that the cold can do amazing things for your body’s ability to heal itself. You will no longer feel apprehensive toward it because you’re in control of your body’s shivering response.

Like the skills I picked up in fighting, this skill transfers to other areas of life too: I’m able to stay focused through discomfort and better execute difficult tasks under pressure.

Like I mentioned earlier, I was skeptical of this course at first. I almost didn’t buy it.

So I understand if you’re hesitant too.

But honestly, when you keep things in perspective, $297 for a 10-week long program isn’t that much.

Or a cup of coffee every day.

You probably spend at least that much on Spotify, Netflix, HBO, and other subscription services. You most definitely spend more than that on going out, buying coffee, etc. And unlike Netflix (or getting drunk on a Friday night), self-improvement has a positive ROI.

You’re not wasting your time.

You’re not indulging in mindless consumption:

You’re investing in your health. You’re learning how to breathe. You’re making your mind and body better.

We all know that. But it’s tough to comprehend beyond a purely intellectual level. It’s pretty abstract. From a functionality stand point, one of the best things about the program is that there’s an app that makes it easy to track your progress.

Ultimately, what convinced me to make the investment was the refund policy.

You get to try out the course for 14 days (that’s a generous 20% of the course duration). If you’re not happy, you get a full refund. In a nutshell, trying it out is risk-free.

And after the first 14 days, the value of this course was already clear to me. They didn’t “hold out” on the good stuff until right after the trial period. So I kept going, and I don’t have any regrets.

That’s the type of guarantee that should make you breathe easier (pun definitely intended).

I’ve recommended this course to several friends and family members, which is why I feel very comfortable endorsing it to you, my readers, as well.

If this review was helpful in informing your decision to buy the course, I’d appreciate it if you use my affiliate link. It comes at no extra cost to you and helps me keep writing and producing content for you.

To recap, this is why you should try out Wim Hof’s video course:

I personally bought the course four years ago and the impact it’s had on my everyday life is significant. I’ve even re-taken the course multiple times since purchasing.